It Is Well with My Soul

It is Well with My Soul is a memoir by Ella Mae Cheeks Johnson about her long 106 year life.

Johnson gained attention in 2008 when she attended Obama's Inauguration. Evan and I also attended the inauguration and were on the same plane as Johnson. We sat in the row behind her as people around us asked her questions about life and her thoughts on Obama. For me, it was a really cool way of starting out our trip, thinking about this black woman who had seen so many changes in society that lead her to where she was that day. 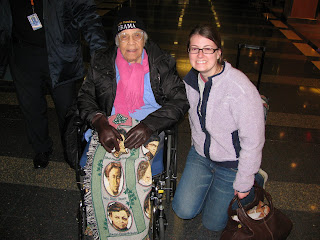 The book was very short, but was interesting considering the wide time span it covered. It focused a lot on her life rather than what she saw in society. It was enjoyable, but I would have been a bit disappointed by it had I not met her because I would have preferred the book to have discussed Johnson's reflections on changes she saw in the the US through the many events she experienced.
Posted by Kennedy at 4:44 PM