Last week for Thanksgiving, my husband and I went to San Francisco.

My favorite part of Alcatraz: 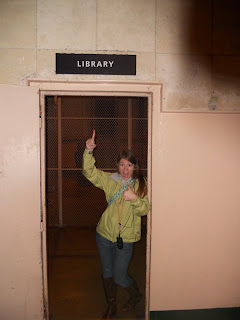 Posted by Kennedy at 9:57 PM No comments:

My husband and I are going to China in the spring. I am so excited. I love reading about China and its culture. I have already read several great books about China and have several more I want to read before we leave.

The Distant Land of My Father by Bo Caldwell (historical fiction)

Women of the Silk by Gail Tsukiyama (historical fiction)

Out of Mao's Shadow by Philip Pan (history)
Posted by Kennedy at 1:17 PM 1 comment:

The Beast in the Garden

In grad school, I took a class on federal land politics. Being from the south, where there aren't many federal lands, it was something I'd never really thought of. The course covered a wide range of topics from Frederick Law Olmstead (of Central Park fame) to Margaret Sanger (birth control advocate) to mining on BLM (Bureau of Land Management, I had no idea such a think existed til I moved to Wyoming)

The Beast in the Garden touches on some of the issues covered in that class. As people move into areas that used to be wilderness, all sorts of situations present themselves. One of those situations occurs during interactions with wildlife. We frequently see wildlife near our house. Evan saw a moose this summer in one of the city parks. A moose swam in the pond across the street from our house last summer. Some antelope ate my pansies last year. However, antelope are thankfully no mountain lions. Mountain lions are scary bastards.

As incidents between humans and the lions escalated, there was growing concern about an eventual human death. The Colorado Division of Wildlife response to the problem was interesting (no changes were made until after a human death, despite numerous pet deaths and lions in downtown Boulder). The book showed the political atmosphere in Boulder (at one meeting about the lions, people show up to make sure the lions rights are being protected).

I read this book in about a day. I couldn't put it down

This view is out our front window. Hopefully you can see the antelope by the tree in the front middle. You can also see the pond where a moose swam.
Posted by Kennedy at 10:28 AM No comments:

I would have read Annie Proulx's Bad Dirt regardless of the cover. But, it's such a fitting cover since it's the third in her Wyoming Stories series. Believe me, that picture could have been taken numerous places around the state.

China Road is in part about the changing Chinese economy and society. This cover gives an accurate view of what the book is about and piqued my interest.

I picked up Maisie Dobbs because of its very cool cover. Luckily, the story was as great as the cover.

How could you not pick this book up?
Posted by Kennedy at 1:55 AM 2 comments: