Hellhound on His Trail 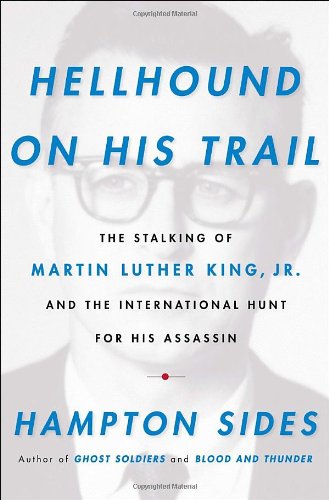 I've read Hampton Sides's Americana, which I really enjoyed. It's short stories about all kinds of random things. Some of them: Mormon archeologists, Tony Hawk, and the Bohemian Grove.

When I read about his newest book, Hellhound on His Trail, I was really intrigued. I knew the basics, that MLK was assassinated by James Earl Ray in 1968. I recognized the photo of King's companions pointing in the direction the shot came from.

This book talked a bit about MLK's life, but had much more about Ray. He was a lifetime criminal, who was a prison escapee when he shot MLK. After Ray shot King, he made a quick getaway. Strangely enough, he made it to four countries before he was caught.

The FBI's search was, at the time, the largest investigation they had undertaken. J. Edgar Hoover was head of the FBI at the time and hated King. Hoover's boss, the Attorney General Ramsey Clark, was at odds with Hoover. The personal relationships in the FBI and in King's Southern Christian Leadership Conference (SCLC) were complex and described in depth.

Sides touches on the possibility of a conspiracy, that Ray was being paid to kill MLK, but it seems to be one of those things that is lost to history and we'll never know.

This was a really interesting slice of history. There was more information and complexity to what happened than I would have guessed. If you enjoy history or true crime, pick it. I also suggest Americana.
Posted by Kennedy at 10:15 PM