The Catcher in the Rye

Like many people, I first read The Catcher in the Rye in high school. I wasn't a fan. I thought Holden was stupid. I hated him. He was whining about phonies when he seemed to be the real phony. He didn't follow the rules. (I'm a big rule follower.) My 15 year old self could not connect with him in any way. I attended boarding school and even that wasn't enough for me. (During my reread, however, I had dreams of my life in boarding school.)

Over the past couple years I have been thinking that I should pick it up again and see what my (hopefully) more mature self thought of it.

I've read a few classics in the past couple years that I'd never read but are common high school picks or reread ones I read in high school. I have gotten a lot out of it. 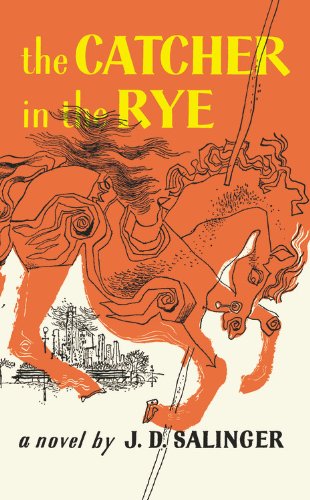 I read Lord of the Flies, which was something I probably wouldn't have appreciated in high school, but found so relevant. Others haven't been as rewarding. I reread The Scarlet Letter thinking I'd like the themes of religion and social norms. Nope. I hated it. It was painful. My 15 year old self's judgment was right on that one. Now, I question why this book is still on high school reading lists everywhere. There are plenty of books that will actually encourage students to read them instead of the Cliffs Notes.

Anyhow, back to The Catcher in the Rye. Didn't like it or Holden way back when. One of my friends raves about it and I figured it was one about which my adult self would think differently.

Holden Caulfield is kicked out of yet another school. He doesn't care about classes and thinks everyone around him is a phony. He leaves school a few days early and wanders around NYC (where he lives) for a couple days before going home.

For the first half of the book Holden really bothered me. I wanted to tell him to shape up and shut up. Then, when it got to the part where he bought his little sister Phoebe a record, my thoughts started to change. I started to feel sorry for Holden. To me it seemed obvious he was having a hard time emotionally. His behavior saddened me. He was trying to act so cool, but was so lonely. His love of Phoebe did me in. Holden isn't a bad kid, just one that need a big hug and some help.

My opinion of the book is now much more positive. I think it's a book that can be viewed quite differently based on where you are in life. As I let it stew over the next few years, I think my thoughts will still be evolving. And that is the sign of a good book--one that you can't stop rolling over in your head.
Posted by Kennedy at 8:48 PM