I love non-fiction and sociology related books, so it's no surprise I enjoyed this one. It's a study in gender roles, particularly the 1950's-70's. As a 29 year old, I have never felt that being a female has in any way limited me. I've never believed my sole or main duty in life was to get married and have babies. However, in reading this book I realize how close we are in history to that type of attitude.

Lynn Peril's book focuses on advice books, games, pop culture, and advertising from the time period to show how women were viewed. And it is depressing. Both men and women were treated as if they had no brain. A woman's job was seemingly to trick a man in to marrying her and then popping ou 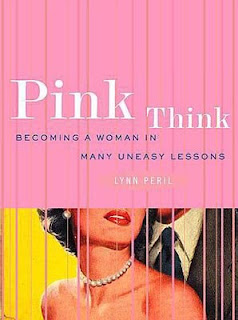 t a passel of babies. And men? Their feelings could be hurt by their wives' dishpan hands.

Some of the interesting tidbits: In 1959, 47% of brides were under the age of 19. (!!!!) (Today the US average is 25 for females, 27 for males.) But in case you did get a college education, it wouldn't go to waste as "housewives were occasionally called on to give book reviews to the PTA." And remember ladies, it wasn't enough to be pretty and smart. You must be dainty too.

This book helped me understand where my grandmother is coming from sometimes. I've always realized she's from a different world, but all the examples in the book really showed what it meant to be a young housewife in the 40s and 50s. The choices for women then seemed so limited. Interestingly, about 20% of married couples today do not have kids (by choice or infertility). This number is double what it was just 20 years ago. Clearly, when given the choice, women are making different decisions.

Anyhow, this was a really interesting, yet horrifying read. I can't understand how women were treated as such simpletons and how they were allowed such little independence. Yikes.
Posted by Kennedy at 11:21 AM